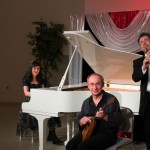 It is an interesting group in the world of the modern worldmusic. The three musician are following the modern and tradition way, the classic and the folk. In their program they combine Antonio Vivaldi, Astor Piazzolla with temperamental arrangements of old russian folk. „The Balalaika is the soul of the russian people“, says Alexander Paperny. All together with the piano player Elena Lelchuk and the oboe player Wladimir Skliarenko the „Russian Consort“ shows not only that the russian soul find a home in the native country, not that the oboe and the piano is only made for classical music.

The balalaika with her three stripes is harmonise with the french sound à la Piaf, tango-rhythm from Buenos Aires and also international pop-rock, just as the oboe, which shows in the russian folk the melancolic side.
Elena Lelchuk was born in Wolgograd. She was studying piano at the Sobinov-conservatory from 1979 till 1983 in Saratov. Afterwards she was performing in different chamber music formation. Since 1990 is Elena a solist in the music group „Trio-sonata“. In 1998 she won the international music competition with Wladimir Skliarenko in Ragusa (Italy).
He is originally from Saratow, where he was studying oboe at the Sobinov-conservatory from 1974 till 1979. Right after he became awardee of the woodwinds competition of Russia and the sovjet union. From 1976 till 1991 Wladimir was working as a solist in the philharmonic orchestra of Saratow. He took part on the international festivals of german music in Saratow, the american music festivals in Moscow and the festivals „Asia-Europe“ in Kasan. In 1990 Wladimir Skliarenko created the baroque-ensemble „Trio–sonata“. It’s a mix of baroque music and modern composer of the last centuries. „Trio-sonata“ is known all over Europe. From 1994 till 2002 this cast was a part of an orchestra of the concert-ship „Azart“, which is a swimming music theatre, what was performing in 19 different countries in Europe.